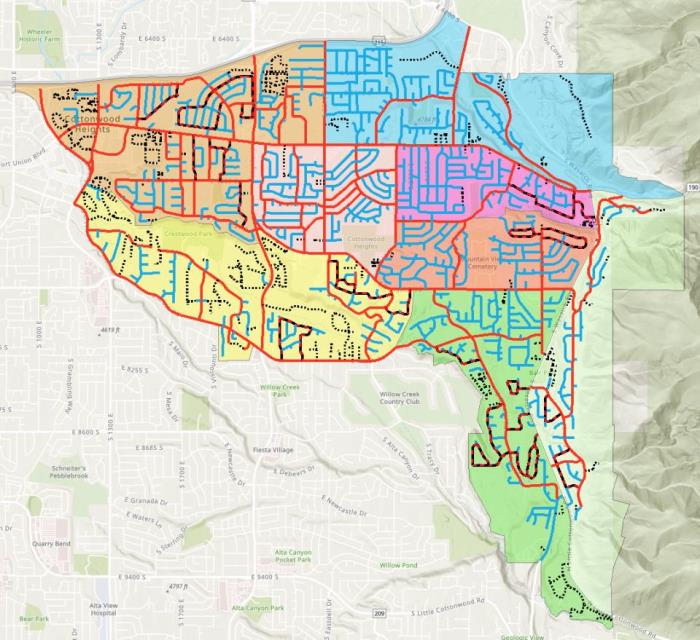 File a report of snow that needs to be removed

The purpose of this policy is to state the city’s philosophy, objectives and procedures for snow plowing activities on the City streets and sidewalks. It also establishes how problems or challenges in the City will be collected, reported, and responded to during a snow storm or other event will be addressed.

The objective of these policies and procedures is to give direction for timely and efficient removal of snow and ice from city streets and walkways in Cottonwood Heights. Priority is given to maintain safe travel for the largest volume of traffic. Limited resources may result in delayed attention to areas with lower traffic volumes. Road conditions can’t be guaranteed during storms of high intensity or long duration, but plowing will continue until all streets have been cleared.

Our goal is to have all streets cleared 24 hours after the end of a storm.

This policy applies to all public streets, right-of-ways, parking lots and sidewalks under the jurisdiction and control of the City. If an employee taking report is uncertain of this fact, they are to document the information and Public Works staff will determine if it is the city’s responsibility to act. When it is the responsibility of another jurisdiction the Public Works staff will inform the individual making the report and attempt to contact the agency responsible for the area.


Parking on the Street:

Trees and landscaping which overhang the street pavement shall be trimmed to a minimum height of thirteen and one-half feet above the street pavement. Trees and landscaping which violate the requirements of this section may be trimmed or removed by city employees or by any other person or entity designated by the city after 20 days’ notice by certified mail to the property owner has been given. The city shall be entitled to reimbursement of the costs incurred by it in trimming trees and landscaping under this section, and may seek such reimbursement by sending an itemized invoice by certified mail to the property owner at its last known address. If the property owner fails to pay such costs to the city within 20 days after the date of mailing such invoice, the city may cause suit to be brought in an appropriate court of law seeking such payment, interest thereon at the statutory rate, and the city’s attorney’s fees and costs of suit.

It is unlawful for the owner, occupant, lessor or agent of property abutting on a paved sidewalk to fail to remove or cause to be removed from such sidewalk and any existing pedestrian curb ramp all hail, snow or sleet within a reasonable time after the hail, snow or sleet has fallen. Such removal shall in any event occur not later than the same day in which the snow, hail or sleet has fallen; provided that snow, sleet and hail falling after 8:00 p.m. may be removed the following day by 10:00 a.m.

It is unlawful for:

Providing information to the public before, during and after a storm is a vital part of the snow plowing process. Residents can help facilitate snow plowing and know what they can expect in response to a winter storm. Information to the public can be found in the monthly city newsletter, the city web site, www.twitter.com/chcity and messages on the city’s Facebook page www.facebook.com/chcity. Each year prior to the first snowfall, information will be distributed through these resources to inform residents of the laws, policies and procedures regarding snow plowing and related activities.

During snow events, residents may call (801) 944-7000 or email us at snowevent@ch.utah.gov  to report anything unusual, or if they feel they have been missed or they have an issue with snowplowing on their street.

Snowplow operators have been trained to follow the priorities set in the policies and procedures section.  It is detrimental to respond to individual complaints before operators have responded in accordance with the snow plow policy. Complaints will be logged and given to supervisors for review and action.

Claims from residents for property damage caused by snowplows should be reported to the city’s designated risk manager at (801) 944-7022 or email at hsundquist@ch.utah.gov.