It is that time of year again, the snow falls, the canyon closes and the traffic backs up along Wasatch Boulevard and its arterials. Inevitably, frustration comes on both sides, ski commuters and Cottonwood Heights residents.

An unscientific review of the Nextdoor app shows that in the Top of the World area of Cottonwood Heights, there is more concern for skier traffic and Wasatch Boulevard than even snowplowing. Recently, residents of District 4 organized two cottage meetings, to which they invited their neighbors and Utah Department of Transportation (UDOT) representatives, as a way to convey to UDOT the importance of Wasatch Boulevard. The city also held its own open house to discuss what it is doing to address the problem.

Because of this concern, the Central Wasatch Commission (CWC), including Mayor Mike Peterson, Salt Lake County, UDOT, the Utah Transit Authority and the city have been working on several near-term initiatives to try to assuage some of these traffic issues. At our open house in October, City Manager Tim Tingey sought feedback from residents on some of those initiatives, including transit service solutions, congestion management for transit such as enforcement of idling vehicles, direct bus service to each ski area, car rental partnership (requiring rental car companies to be equipped for the Traction Law), and evaluation of traction policy/ordinances. Some of these short-term initiatives have come by way of suggestions from our residents over the last year.

Take for example an email suggestion I received from one constituent. His idea was to put stickers on cars that are compliant with the laws of SR 210—if you have a four-wheel or all-wheel-drive car (or two-wheel drive and chains) and good snow tires, you may receive a sticker which allows you to drive up the canyon quicker than those that do not comply. 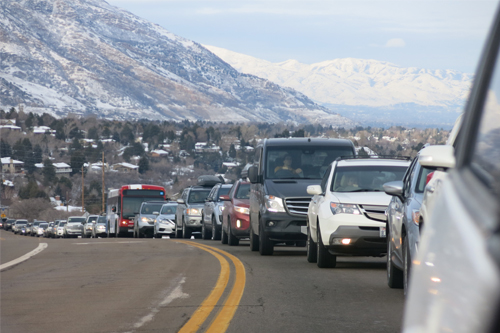 This year, UDOT implemented a pilot program for this very idea for citizens who live or work in the canyons. These individuals can go to the UDOT Cottonwood Maintenance Shed on specific days in January to be inspected. Vehicles which pass the inspection will be given a sticker allowing them to bypass field inspections (also known as metering) when the traction law is in effect. More information on the program can be found at cottonwoodcanyons.udot.utah.gov.

In September, UDOT issued a new rule requiring certified snow tires during winter weather road restrictions for two-wheel-drive vehicles (https://rules.utah.gov/publicat/code/r920/r920-006.htm). Drivers of most passenger cars and light-duty trucks will be required to have tires with the three-peak mountain snowflake logo or an acceptable traction device, such as chains, during weather restrictions on Utah roads. The snowflake logo means the tire was tested and certified to drive on roads where heavy snow is falling. These tires have specific tread patterns, which are designed to help drivers stay in better control in the elements. In the past, two-wheel-drive vehicles could get away with snow tires that had a mud and snow (M+S or M/S) rating in the canyons during severe winter weather. Those tires are still acceptable for four-wheel and all-wheel-drive vehicles, but the mountain/snowflake tire or 3PMSF tire (or chains) is now required for two-wheel-drive vehicles on highways when the traction law is in effect.

These changes should help Cottonwood Heights in the long-run. When the Canyons are metered or being checked by police this will help them approve cars faster. We are hopeful that if this UDOT pilot program works, it will be unveiled to a larger part of the population.

Another idea that was submitted to CWC which we support is to have a centralized coordinator for the canyons. In my mind this person would ensure that UDOT highway signage shows the canyon is closed in real time and to not head into Cottonwood Heights and idle on our roads.

This has also been implemented. The goal of this communication program is to establish UDOT as the primary source of transportation information in the canyons and to have effective and efficient coordination and communication for the transportation-related efforts in the Cottonwood Canyons and surrounding communities. Real-time updates on heavy weather days, and general information can be found on most social media platforms by searching @UDOTcottonwoods.

Mayor Peterson reminds members of the Council often that we have momentum to solve these problems. These steps toward mitigating ski traffic are a direct result of multiple efforts by residents and agencies alike. We are actively taking steps toward improving canyon traffic on busy days, and that is because of residential feedback.

With 2.1 million annual visitors to Little Cottonwood Canyon and with travel times from I-215 to Alta ranging from 45 to 120 minutes on avalanche closure days compared to 28 minutes under ideal solutions, it is in everyone’s interest to find solutions.

In talking to our PIO, Tim Beery, recently, he reminded me of how active our citizens are. Prior to Cottonwood Heights, Tim worked for UDOT Region 2. He said that there were two very vocal communities in Region 2, which includes Salt Lake, Summit and Tooele counties, and one of those was the Wasatch Boulevard area of Cottonwood Heights.

As a city, we could not be prouder of this sentiment. We actively strive for feedback from our residents and we are always looking to make our community better. We ask for your continued feedback as we work to improve mobility through Cottonwood Heights. Please send feedback in any way you can, whether in person or through electronic means. We listen to what you say, and we do our best to implement improvements where and when we can.

Electronic comments and feedback can be sent to PR@ch.utah.gov